MS Office 2010 Beta is now available! After being invited to Beta test I decided to sign up. It comes in both 32bit and 64bit flavours suitable from Windows XP (SP3) right up to Windows 7 (32/64bit). Microsoft say that the 32bit works well for all platforms ... lets see.

This version comes with most of the familiar items: Word, OneNote, InfoPath, PowerPoint, Access, SharePoint Workspace, Outlook, Publisher, Communicator and Excel. The layout has changed and notably the big button on the left top corner has gone. For example, in Word, selecting the File tag gives you this (select image to enlarge): 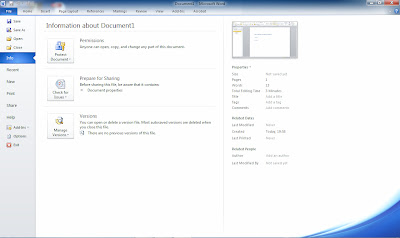 This is back on the 'Home' tag: 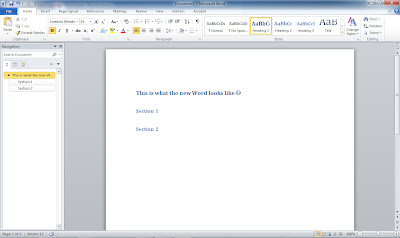 Most Office 2007 users may be pleased to find a fairly familiar layout.

Another feature that has been added that I would describe as a 'Google Doc -ness' , whereby co-authoring is available allowing users to share and edit documents at the same time online, could be a very interesting feature. 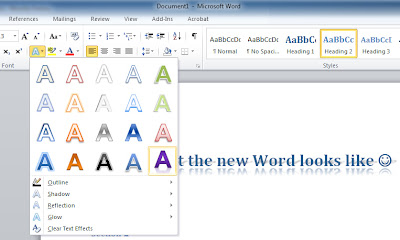 A note for those wanting to install the 64bit version. I use Office 2007 and even though Im using 64bit Windows 7 I had this error: 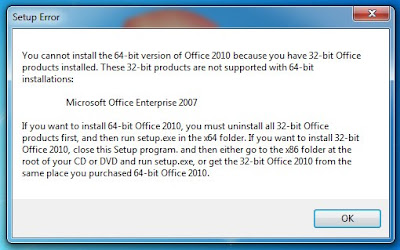 Although Microsoft ask for a clean install for testing, I can report that the 32bit version allows you to install 2010 alongside your existing Office :) Which is what I have done here.

I had one error opening Word for the first time:

But after this, Word open without a hitch, so far so good...

A rather fun element to the Beta testing is the ability to send a screenshot to Microsoft, either choosing to 'Send a Frown' or 'Send a Smile' depending on your experience: 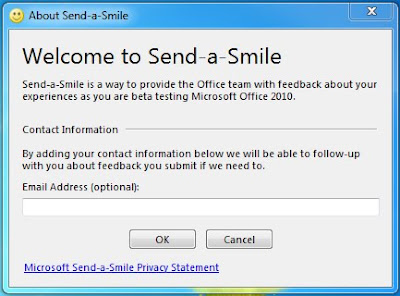