Troubleshooting technology, its all about understanding the terminology

Thought I would inject a little fun into this blog post today, a very funny video sent to me by a work colleague. Learning technologists often find themselves trying to explain all the different terminologies related to technologies and I think the following comedy sketch really sums this up. Of course they are talking about Blackberry mobile devices, among others, but you can really see how confusing our lives have become especially with the growing tend of companies naming their brands, products and services after everyday fruits... Enjoy, the blackberry sketch :)


View Coverack (PDAs) in a larger map - N.B. a few icons have photos (select to view)

I have been working on another project (similar to the Kingsands geology fieldwork) with Dr Meriel Fitzpatrick and Dr Mark Anderson utilising GPS enabled PDAs, its a mobile assisted teaching resource for geology students. This time the location is a coastal village called Coverack in Cornwall (UK), unlike Kingsands which was a small section of beach north of Kingsands. This location covers over half a mile, as shown on the map from point 1 to 7. A few of the site locations have images of the PDAs being tested, click to show. A larger map view is recommended in order to view these photos. The blue line is where I was wandering between sites 3 and 7 during some opportune testing, but give some idea of how the devices are used as participants move between the sites.

This project received a teaching and learning fellowship in 2010, and is now flourishing into a working educational resource. Thanks also go to Tom Shelmerdine who also helped to gather a construct a lot of the data used in this resource.

This noble fieldwork resource will be tested with students in the latter part of March 2011.

More details available on the PedRIO database
Posted by Jason Truscott at 17:01 0 comments

Learning technologies for the Hydrographic Academy: thoughts on initial approaches 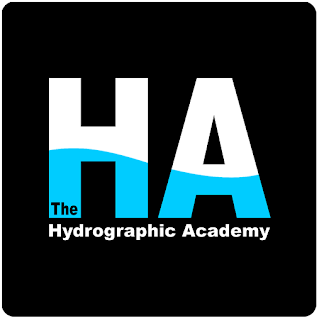 Dr Richard Thain came to me with his idea for the 'Hydrographic Academy', he felt that an academy needs a logo to give it a proper identity. Ok so what do we do... I personally felt that the key to logo design is ensuring that it says something about the organisation or what the organisation can do. I'm thinking back to one of my old business study courses: 'Design in Business' for which my main project was looking at logo designs. Funny how these things come in handy. I digress...

We brain-stormed several ideas for the Hydrographic Academy, but the key element was that of a connection with water, its about hydrographic surveying and related subjects after all. Richard leaves it with us...

Ok, so I had to think about what angle to go for...Inspiration comes in many forms, but before diving in, we really need to do our market research, what is already out there? Equally, we don't want to come across as copycats. Looking around at companies and competitors there are a plethora of formats, some do indeed have a watery theme, but they tended to reflect the surveying parts, and or the geographical elements. For an academic theme I felt there was scope for this to be much broader. I also had a chat with my wife (yes, I know cheesy as this sounds), she has a very good eye for detail and has done a few logos herself for work. She said that she generally favours simplification for a few reasons, which I also agree:

1) its easier to reproduce the logo when printed in colour and or black and white (go for as few colours as possible).
2) simpler designs can actually have a greater impact and appeal visually. If it's too complicated people don't always make the association of a logo with an organisation.
3) you are less likely to get colour clashes when used in online materials.

So, Im happy with the simplification approach, now onto the concept map. I decided it must have waves, because waves are used to represent both sound (ultrasound) and water. There is also a scientific element to this, light 'can' travel in waves... The first ideas I had was of putting the wave behind the lettering of 'Hydrographic Academy' using a mask, giving it a wordy water tank feel, but I found this looked very busy and not professional. The wave was good, but what about the rest? I also felt we should use some black, its a neutral colour, and in many fields it is associated with authority and respect. Look at Police or Naval officer uniforms as examples.

Right, so I have two concepts that would fit well, the wave theme, the black to represent authority (e.g. the Navy) plus the hidden deep ocean waters often surveyed. All I needed was the simplicity part, using black and white was staring me in the face. White representing light (ideas) and the sky, it also gives a fantastic contrast. I juggled with various examples of ordering and placement of the wording, but the complete word 'Hydrographic Academy' does not lend itself well to manipulation. Although, I also felt we needed the full description for it to work properly.

What about using 'HA' on top of the the 'Hyrographic Academy'? Could work, people often abbreviate organisations in conversation, even the University of Plymouth is often referred to as 'UoP' in informal conversations. To make sure that there is no difficulty in reproducing fonts and to avoided usability and accessibility, its always best to go for the San Serif ones. Yes you have guessed it, versions of San Serif has been with us since the late 18th century (giving it an established feel), what better way to reflect the marine history with the University of Plymouth.

After numerous versions thrown out, I arrived with the logo you see. In this design it comfortably takes 'hydrographic academy' underneath the main lettering of the HA, thus providing additional information about what it means and also provides that 'underlined' effect. I finally put the 'THE' at the bottom of the 'H' as if it had sunk to the ocean floor waiting to be discovered, its a bit of a fun twist to the overall visuals.

After firing off this design to Richard, I was happy to get a positive response, he felt it should goto the next steering group meeting for comment, where it was accepted. Hence this post you are reading now.

The Hydrographic Academy and related logos are the copyright of Plymouth University
Posted by Jason Truscott at 19:02 0 comments