A PowerPoint Template for the Hydrographic Academy 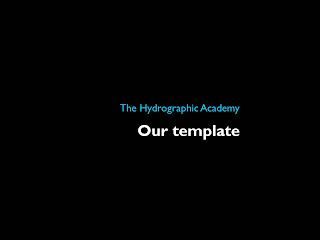 I have been doing a fair amount of work on creating a template for the Hydrographic Academy for both presentations and also for content creation in PowerPoint 2010. The latter would be used within the Mohive interface I have discussed in earlier posts. I felt it very important that the
Hydrographic Academy identity is carried throughout and provided in a professional manner. The main structure is black or white backgrounds, simple clean lines and a sans serif text to suit the Disability acts. I went for the HA blue, as we are now calling it, for the text colour (when used on a black background) and plain black text on white as an alternative. Black backgrounds lend themselves well to excellent contrast; generally are used in video productions; are predominately easier to read in low lit conditions; and on certain devices use up less battery power on back lighting (so to speak). 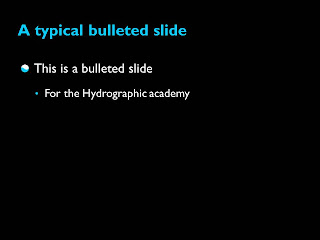 Bullets were designed with the white and blue from the logo in mind.
Why the simplicity? This is a personal view, but I often feel that PowerPoint templates have a tendency to age rapidly. Going for simple fonts and lines are less likely to age and it gives it as more established and classic look. I also think this looks much more professional to the end users.
Transitions are basic wipes (nothing to tacky please...) and a rather nice water ripple effects for starting screens. We are in discussions on whether to add the HA logos in certain parts of the slides, but no decisions as yet. Undoubtedly this is not the very last version (as I'm always in talks with our content developers experiences of using the template), but I thought this closely resembles the most likely version for the future. I'm atticipating this will feature in many a presentation before any content is released in Mohive, at least it's a taster of what is to come...
Posted by Jason Truscott at 12:11 0 comments

I was interested to find that YouTube now has a Creative Commons option for their uploads. The ability to share content with others and also allow them to adapt for their own needs it good for all open source users, this addition is certainly an added bonus. Although as pointed out by a colleague this does not include the Non-Commercial (NC) part, which your educational establishment or company may prefer, not forgetting those wishing to make money from their work.
Looking at the details provided by Youtube it quotes:

For more information on the CC-BY license—a summary of the full Legal Code with the full license accessible at the bottom of the page—please visit this page on CreativeCommons.org.

This creative commons page actually states its an:

Attribution 3.0 Unported (CC BY 3.0)
You are free:
to Share — to copy, distribute and transmit the work
to Remix — to adapt the work
to make commercial use of the work
Under the following conditions:
Attribution — You must attribute the work in the manner specified by the author or licensor (but not in any way that suggests that they endorse you or your use of the work)...

If your dont want other companies using your content, then probably steer clear of this option, it may not be the best option. Perhaps YouTube will also provide an option that has NC in the future? Could be handy.
Posted by Jason Truscott at 20:12 0 comments

How I created the Hydrographic Academy promotional video

This is an HA promotional video I have been working on, but before I discuss the details, I have to thank the following people who helped make this video happen:

Ok so how did I achieve this?
With a lot of head scratching, but also backed up with some software and hardware. I predominately used Adobe Premiere Pro CS5.5 for the main editing of the footage and After Effects CS5.5 for titling and special effects. The main footage was taken on a Canon 550D DSLR, with a Canon 17-85mm IS USM lens, shot at 24 frames/second. Stills were also intermingled in places using content from the same camera. The thumbnail videos were sections of Dave Hurrell's footage shot on a Sony HDR FX1 camera.

The story board created for this production was a brief show and tell of what the Hydrographic Academy has to offer (as shown in the video). It includes lens flare effect titling graphics with blue colouration from the HA's main logo. The music is called 'White water rapids' which is copyright free from the Plymouth University's own UpMedia staff and student area (only) resource. I wanted to give emphasis to the sea and water, hence the different shots of boats and frothing white water. Equally I wanted to hint at the sort of equipment being used in the training, this was achieved by a few intermingled shots of electronic measuring equipment and more traditional hand held devices. Finally, so as not to make it feel like it was an academy with no soul there are little insights of the people involved in the project, who are working hard behind the scenes.

We hope you enjoyed the video!
Posted by Jason Truscott at 15:18 0 comments