This is just a short post, that I thought I should mention, as I discovered recently that Google begins photographing the Amazon for Street View. For those not familiar, Street View provides the user will a full 360 degree view of a point on the map, the user is then able to jump into another 360 to see the next stage. This is relatively seamless, so it feels like you are actually moving along the river.

This should be interesting for any of our environmental orientated academics and students. This will effectively allow students to view the Amazon River as if travelling down it on a boat. Worth keeping an eye out for this project - I think you can expect others to follow.

Posted by Jason Truscott at 00:56 0 comments 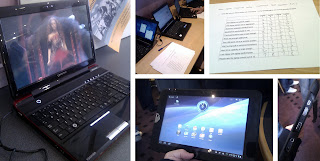 I was lucky to stumble across a Toshiba demonstration today (at Plymouth University), a chance to play with some new technologies. It included a mix of their laptops and also the new Qosmio F750 Toshiba Laptop 3D. Which interestingly requires no 3D glasses (a bit like the Nintendo 3DS). Where it differs to most 3D systems is that the webcam follows your eyes in order to obtain the best 3D effect. Interestingly if too many people crowded the screen it made for a more confusing picture. That said, it was very impressive and even at odd viewing angles there was some 3D effect. I felt the overall image made the characters, backgrounds and foregrounds in the film feel a bit like flat animated 2D objects placed at varying distances, although the depth of field was certainly effective. I cant say at the moment that I'm convinced with 3D, its a big improvement over older attempts, but it still looks a bit synthetic. There is of course the concern that some may still feel a bit nauseous watching for any length of time.

They also brought along the Toshiba Thrive tablet (pad), using Android 3.1, which I was pleased to see. It was relatively quick and smooth, but probably not quite up to its competitors, such as the Asus EeePad and Motorola Zoom. I felt the screen was a little washed out, but this is only a minor point. It had a range of connectivity including SD Card, HDMI, USB and the ability to swap batteries easily (the back cover could be changed to any colour you like). It was claimed that battery life was around 8 hours, but there was no means of testing how well that worked today... Thanks to all involved for letting me crash the party...
Posted by Jason Truscott at 12:46 0 comments

I have been investigating software licences for the Hydrographic Academy project as teaching materials will use a fair amount of offline software and applications. Some of the learning object run on Adobe Flash and students would need Acrobat (for PDF files) - I cant assume they will all have good internet connections! After some asking around and investigating on line, I came across the Licencing area on the Adobe website. I thought it was going to take several days to get a response, but most of it was in fact automated. I suspect the final stage required an OK from 'a person' but this was not clear, as I actually recieved licencing permission for distributions via DVD/USB drive within 10mins.

It looks like this process has to be repeated yearly, filling out the same form again.
Posted by Jason Truscott at 16:06 0 comments It has taken a fair amount of collaborative work, but I'm very pleased to announce that the Hydrographic Academy blog has now gone live!
This blog will feature details on how the Academy is developing, updates on course materials and even a few post on the technologies used to deliver content to the site. The Hydrographic Academy is in it's infancy at the moment, but more information can also be found on the HE STEM website.
I went for the blue HA logo colours and decided on a grid effect as the concept of surveying very much revolves around maps and plotting. The wave effects were to express a sonar/sonic elements of surveying, so I used a variety of sinusoidal and slightly more complex sound waves to create this pattern, which I felt encompasses this very well. All of the background was achieved in Adobe Photoshop CS5.
Posted by Jason Truscott at 15:29 0 comments